2012-07-23 Aus Von christiankohl
Tell you what, it’s totally hard to judge those distances in the sand dunes. And it’s a nice workout, too – three steps back for every step you take. 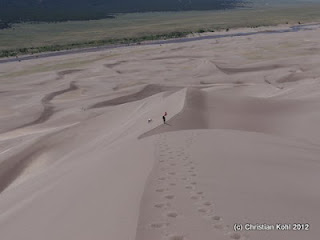 But all the sweat was worth something – I discovered a secret that’s going to turn the world of historians upside down: Rommel lives – in Colorado! Here’s the proof – old desert fox hiding in his flying saucer under one of those giant dunes … : 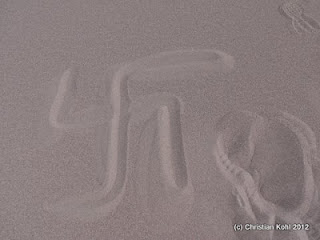 Well, after unearthing this we were in desperate need of some refreshment and I can wholeheartedly recommend Milagros Coffeehouse in Alamosa. I had one of the best iced mochas ever and they had supertasty cinnamon rolls! Go Milagros!

We had not really made up our minds how far we wanted to go west, but with all this lovely food and drink we decided to head straight to Mesa Verde. Turns out that the closest village is Mancos, just a couple of clicks from the NP entrance. The accommodation in the park itself was booked out. So we stayed at the Enchanted Mesa Motel, which is not a chain motel and so refreshingly different. A pity that we only stayed for a night, but I can really, really recommend this place! I was a bit worried about dinner at first, but we followed the Motel owner’s recommendation and weren’t disappointed – Millwood Junction, nothing fancy, but honest and good and thank you for that! Also, thank you for the toilet paper, dear room maid! It’s so easy to get me to tip. 🙂 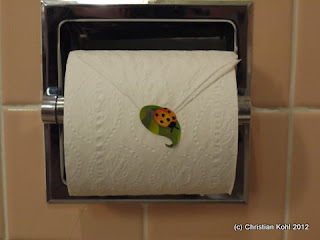