Im Mai … kommt der Winterweizen. Was auch sonst?
Seriously, we were dead tired, having just stepped off a 14 hour flight from Singapore in the morning but this didn’t stop us from finding our way to the Bi Nuu club in Kreuzberg to see the lovely John K. Samson & Co. It was well worth it, since we did not only get songs from Christine Fellows and John K. Samson, but also a lot of classics from the Weakerthans. So like a secret bonus level in this video game they call „real life“. 🙂 What can I say? I’ve been a big fan of The Weakerthans since 1997. I still remember the day Marcus sent me the „Fallow“ CD … mindblowing … an instant love affair. And then „Left and Leaving“ which accompanied me through an difficult interesting time in my life … . Even after hearing all those songs a gazillion times and then some and after seeing them live each night for three while on tour in 1999, I still wasn’t tired of listening to their music.
John is not only a super nice human being but also an extremely talented songwriter and lyricist. And that of course shows in his „solo“ projects, „Winter Wheat“ is a fantastic arrangement. And since he brought a few former Weakerthans colleagues with him on stage, the live performance was of course mindblowing. Thank you very much. Always amazed as to how much great music comes out of such a small town. Go, Winnipeg!

(And no, Jason is not using a bong in the second picture … it’s about the bloody music! :-D) 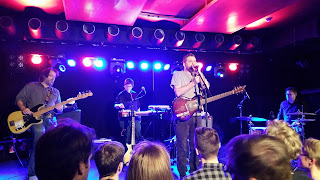 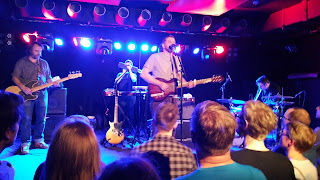