Truly demented I am

Why didn’t anybody tell me I’m repeating myself? Sorry for the last post, but hey, life goes on as my friend 2Pac would’ve said.
So we spent a whole day hanging around in Te Anau doing more or less nothing. Not quite nothing, I was on the phone and on twitter all day trying to sort out out luggage, we went for a run around the lake, and did some more shopping. The bill for SAS was growing by the minute. We were lucky enough that our friends had rented a huge and wonderful house (thru AirBnB) with spare bedrooms so we could stay there for a small additional fee. Our original plan was to do the Kepler track from Friday to Sunday but without gear this was not a option. So what was I doing to get it back? Well, first of all, the Reisebegleitung’s bag arrived Thursday evening. I’d been on the phone with Air New Zealand Thursday afternoon, after we got back from Milford, and they had received it, immediately put it on the next flight to Queenstown, and the folks in ZQN immediately put it onto the last Tracknet bus to Te Anau (ca 180km). So I picked it up at 8pm in the evening and the Reisebegleitung was happy again and continued to gloat. This is a good example of how it should work: The airline cares, actively monitors progress, and does everything to get things done asap, keeps the customer informed. So absolutely no worries here and thanks a lot to Air NZ for resolving this so quickly – especially since it was SIA that lost the luggage, not Air NZ. The counter example was the other bag, the one that SAS had fucked deliberately, not by mistake, right in Berlin. The problem here was that it was not handled by Air NZ, but by Menzies. (Why – I don’t know, I mean, what good is the fucking „Alliance“ if you don’t take care of your „partners“ affairs?) And Menzies turned out to be the problem. Air NZ staff actually looked into the records (they can see them alright, even if they’re not handling the case) and confirmed that the bag had arrived in AKL 13:35 Thursday local time. Unfortunately, that was all they could do for me, they gave me the number from Menzies and I set forth on my quest. At that time, I didn’t know it was going to be quite so epic. If I had known, I’d flown straight back to AKL and beaten the shit out of them. All of them.

So this is an open challenge to all Menzies staff in AKL – meet me on February 14th for a 1:1 – no weapons, no witnesses, no police. And have the ambulance waiting, you’ll need it.

So I phoned Menzies baggage services. You get the usual menu – press 1 for blowjobs, 2 for more stupid announcements, 3 for lost or delayed baggage. 3 it was. Phone rings a couple of times, recorded message tells me that their currenly can’t answer the phone for operational reasons (what a shit phrase) and ask me to leave a message with file reference number, name, phone etc. so they can get back to me. Also ask me to send an email. I duly complied and did both. Didn’t hear back. Phoned again an hour later. Same thing. Started phoning every five minutes, same thing. Always left the same message with all the details. I looked up other numbers and email addresses on their website, called and emailed them with all the details. No reply. On Friday, I intensified this, called every five minutes, always the same voice mail … . No replies whatsoever. Friday early afternoon I then took to twitter – no reply from Menzies. But after I had mentioned „@Auckland airport“ in one tweet expressing my dissatisfaction, the @Auckland account, which is a radio station, apparently notified the offical AKL airport account and they got back to me, asking for the details so they could pass on to Menzies. Great – so I sent them the details. No reply from Menzies. Note that by this time the bag should have arrived in Te Anau, because I had proof that it was in AKL and I knew from the other bag that it’s a piece of cake to ship it from AKL to its destination. But Menzies continued to play possum. On Saturday morning I saw a missed call and rushed to check my voicemail – a call from Menzies! Indeed, in the middle of the fucking night, but they only said that I should ring back please and provide my details so they could look into it. What fucked up world are they living in? They had my details 500 times over thru various channels! Nevermind, I duly called the number and … IT’S THE SAME FUCKING MENU AND VOICEMAIL AGAIN! Aaaaaarghhh! Oh Lord, please give me a railgun. So, left another message, called every five minutes. Nothing. So, back to twitter and my friends at the Auckland Airport account – I updated them and they promised me to ping Menzies again. By that time I think they were nearly as pissed off as I was. Also phoned Air New Zealand again who were so kind to provide me with some more numbers to try. So one of these numbers was for AKL airport, I call them, explain it, they put me through to Menzies, guy picks up, I explain I’m after lost luggage, he puts me through again, woman picks up only to explain that she handles check-in, not baggage. And I’m like, what the fuck, your colleague just transferred me to you? So whom should I be speaking to. She said she doesn’t know and that was it. So fuck you, stupid cunt. Anyway, by now it is clear that they simply don’t care. So I phoned their number a few more times and filled the voicemail with threats and abuse, lots of nice four letter words. Some even in German. The same for twitter, facebook, and email.

In the meantime, when it became clear that the bag wasn’t arriving Friday even though it was in the country, we went shopping again, this time really racking up a nice bill for SAS. We’d been considerate so far, only buying cheap sunglasses, cheap hat, some stuff in the pharmacy etc. This time, I needed proper outdoor gear, we both needed proper shoes etc. And there is only one store in Te Anau with limited range. So we now both own a nice pair of trailrunners, and I have another set of lightweight hiking gear … . On Saturday, we set out to do the Key Summit trail and also did a quick side trip to Marian falls. Wonderful scenery again, Key Summit was in the clouds almost the whole time, but there were a few patches of blue sky which made it magical. And the forest is more beautiful and enchanting in the clouds, too. Saturday evening I had a „Double Garlic“ pizza at Ristorante Paradiso in Te Anau, and it was really good. And really full of garlic, hehehe. So no kisses that night. 🙁 Neither next morning. 🙁 🙁 On Sunday, we decided to do at least a day walk on parts of the Kepler, so we took the early water taxi to Brod Bay, hiked up to Luxmore, then back down and walked back along the lake to Te Anau. 27km altogether, in brandnew shoes, but still fun. The moment we stepped out of the bushline on the ascent to Luxmore Hut, a Kea was lying in wait and ambushed us. I love these birds for their anarchic character and because they love to destroy things. Destroy what destroys you! If they were listening to music they’d love Kreator. Even the Reisebegleitung’s considerable Beastmaster skills could not tame the beast! 🙂 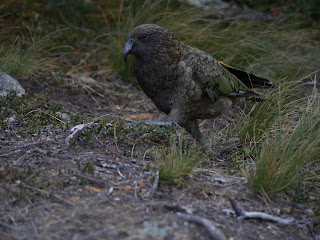 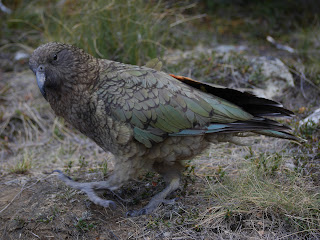 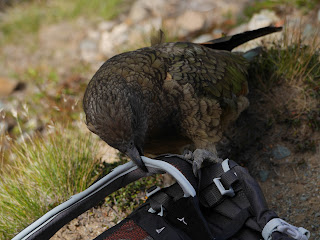 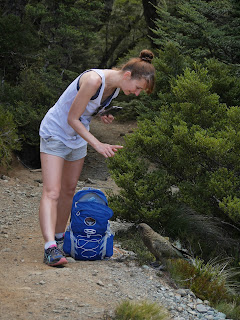 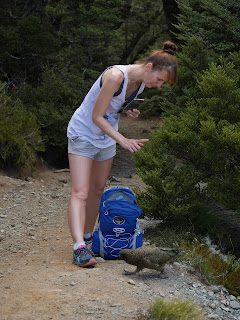 On the descent, early afternoon, nearly back at the lake again, my phone rings. In the bloody national park. Reisebegleitung rips it out of the backpack and with shaking hands I answer the call. It’s Menzies again. Aukland aiport has contacted them and asked them to get back to me. You’re not saying?! So anyway, dude explains that they have my luggage and I must come to AKL to get it. WTF??? I’m like, no way. He’s like, we don’t have a contract with the airline to ship it any further. I’m like, you better get it down here or you’ll regret it. He’s like, what’s your nearest airport? I’m like, ZQN. He’s like, I need to speak to my superior. And then, two minutes later, he tells me they’ll make an exception and ship it to ZQN next morning on Air NZ. But I must pick it up from there. At this point, I don’t really care anymore and agree. Case closed. 150+ calls, 25 emails, plus tweets and facebook posts. And I only got an answer because the twitter team of AKL airport cared and took action.

Questions remaining: Why don’t you react to the customer interaction channels you’re advertising? You could have told me this on Thursday, I could have picked up the bag Thursday evening, Friday morning, saved everybody lots of time, hassle, and SAS a lot of money? And why did you only react when AKL airport kicked your arse? I know the answer: Because you are full of shit, you don’t know how to do your jobs properly, and you don’t give a shit about the customer. The funny thing is, that all the others I have involved in this – and whom I did not expect to help out and who were not obliged to do so – they did all they could, went out of their way to help me sort it out. Thank you to @Auckland, Auckland Airport, especially your twitter team, Air New Zealand in AKL and ZQN!!!

So, to wrap up the Sunday, strolled back along the lake, had some nice real fruit ice cream at the gas station, checked into the Lakefront B&B (which is fantastic), shower, dinner, and then a lenghty session to organize shit.