We left beautiful Cape Palliser with a heavy heart early Wednesday morning for the long drive to Whakapapa Village, which is the starting point for the Tongariro Northern Circuit multi-day hike. We took it slow, meandering through the Hutt Valley and the took the Manawatu scenic route, very beautiful and definitely a spot we need to explore more in future visits. Lunch stop was at an old familiar place in Woodville, the good old Aryan Cafe 88. I’ve made enough jokes about them in previous years, so nuff said. But it’s a nice cafe, very friendly service. On we drove and got to Whakapapa Village shortly after 1pm, checked into the DOC office, and were on our way at 2pm. The first leg was a short one only, ca 9km to Mangatepopo Hut. They call it the „ditch track“ and the name is well deserved, a bit muddy in parts, but nice, coming ever closer to Mt Ngauruhoe. The hut was ok, too. Not the biggest cooking/dining area, but it worked, since it wasn’t cold. But if it gets really chilly and hut sleepers and campers all crowd in there, it will get very cozy. Unfortunately, the Reisebegleitung didn’t get any sleep at all … . So, an early departure with a bit of mumbling and grumbling from behind … but taking off at 5.45am had two great advantages: first, we had ample lead on the hordes of daywalkers (for this section of the track is shared with the „Tongariro Crossing“) and second, we got to see a beautiful sunrise halfway up the way to Red Crater. (Third, we did the tough climbing pieces early in the morning, when it was nice and chilly.) Wonderful views of the western valley and Mt Ngauruhoe. 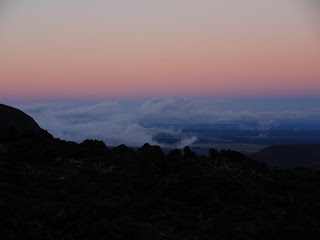 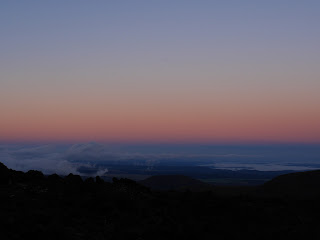 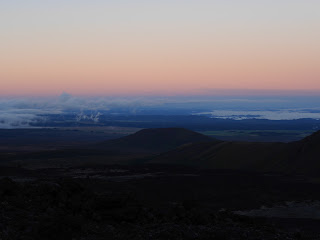 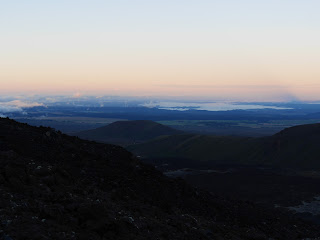 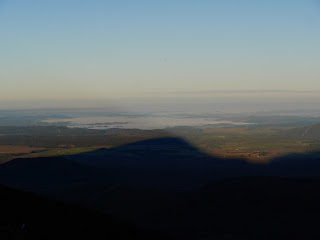 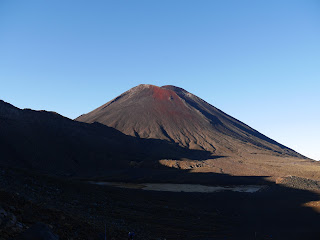 The climb was not as hard as I remembered it from the two earlier times I did this track (the crossing) many many years ago. Although we were both carrying much heavier loads this time. Guess this shows how quickly the body adopts, even in our old age. And maybe because DOC has put steps in, so it is much easier going than the scramble up the volcanic rocks in the old days. It’s a pity but unavoidable, I’m afraid, too many people would quickly erode the mountain away otherwise.

The mountain weather was fickle as usual, One moment. brilliant blue sky and not a cloud in the sky, five minutes later, we’re surrounded by clouds and can’t see a thing. Rinse, repeat. But I like that, it’s part of the appeal. The daywalkers can go and sue the DOC because they didn’t get to see the Emerald Lakes, hahaha. 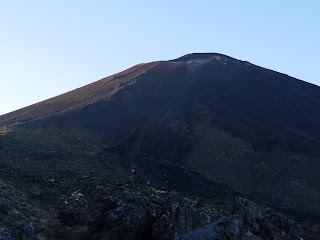 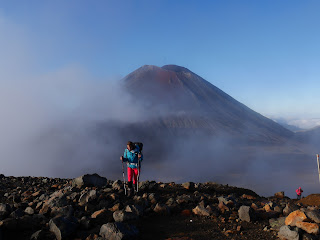 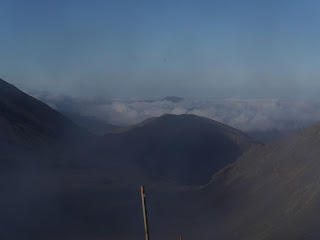 After descending from Red Crater, the hordes continue down to Ketetahi carpark, but we took a right turn towards Oturere Hut. It’s fascinating how the scenery varies again as we cross volcanic desert valley on the eastern flank of Mt Ngauruhoe. As a bonus, wonderful view of Mt Ruapehu as well. 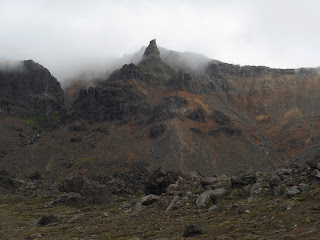 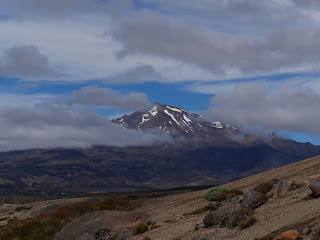 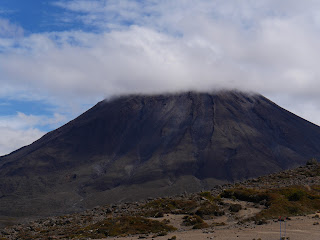 Having reached Oturere Hut, we took our first break after ca 13km and ca 700m elevation gain and then loss again. Some nice porridge, god bless MREs! 😀 The hut itself is small and was very dirty, water pump in the kitchen was broken. Also, most of the bunks are in the „common area“, so early risers will definitely wake up everybody else. Glad we didn’t stay here. We then continued on for another 8,5km to Waihohonu Hut, which is brandnew and gigantic. Although I think that two toilets is probably not enough if all bunks are booked. Well, whatever. Still a very nice hut! We reached it at 1.30pm already and then the Reisebegleitung decided that she’d rather continue walking back to Whakapapa village, which we’d originally planned for the next day. But since she hadn’t slept well for the past two or three nights she felt like completing the circuit early and sleep in a real bed the next night. Fine with me, I always enjoy a good challenge. We had plenty of food left, refilled our water at the hut (all huts have rainwater which is perfectly safe to drink untreated), rested for half an hour, notified the hut ranger of our intentions and then set off for the final 15,5km. 🙂 Well, what can I say? First of all, the track profile, especially the elevation profile they print in the brochure they hand out at the DOC is complete bullshit, so get a real topomap if you want precise info. Also, the distances and times given on the signs are not accurate and vary … . So again, be prepared to always add 1km or so to any distance given, but take off a third or even half of the time estimate they’re giving. These last 15km were definitely more undulating than expected and the Reisebegleitung soon started to regret her choice just a little bit. Just a little bit. We took several breaks and I took over some of her stuff into my pack to ease the load on her shoulders and then, finally, when I’d already feared that I’d need to break out the whip, we spotted the Chateau Tongariro in the distance. From then on, smooth walking for another hour and we got to Whakapapa Village shortly before 6pm. 36km, more than 1000m elevation gain and loss, no shade all day, 12-15kg packs, not too bad. 🙂 I greatly enjoyed it and so did the Reisebegleitung in the end. Right decision and she got to push her limits, very well done indeed. I’m proud of you. :-3
Into the car, 40km drive to Turangi and check into our room at the Judges Pool Motel, which I’d booked on the last few meters approaching Whakapapa Village. A very nice motel, very clean, super spacious rooms, and very friendly hosts. They even found me a brush so I could clean our boots. 🙂 Two hot showers later, we headed off to the Turangi tavern, picked up some delicious pizza and fish + chips, watched them kick out a local troublemaker with a flute (I was hoping to finally witness a nice bar brawl, but was disappointed, all very civil), ate, slept for 10 hours straight. 🙂 Not too bad indeed. Next morning, a very nice breakfast at the Hydro Cafe, and then off North to Ohope Beach!
KategorieNZ