I’ve fallen behind, I admit that. It’s partly my lazyness but also due to the fact that the coverage is extremely patchy and it is hard to find a spot where you can actually upload some photos.

We began our jouney with some ice cream in Milano, because they have first class ice cream at the airport of course. It’s Italy after all! 🙂 This is where the crazy routing makes sense not only pricewise … overall, I was impressed by the makeover of MXP, many years ago it was a crappy airport, but these days, very good! And the food is lightyears better than what you’d get at home, the LH lounge is also bright and airy and quiet. 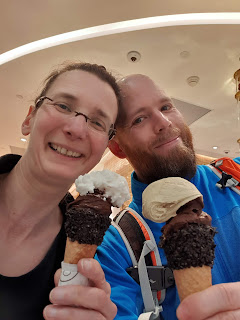 Next short stop – 90 minutes to change a plane in Singapore. It’s the Chinese Year of the Pig, how cool is that when travelling with a pigophile?
Another thing to note was the contrast between the LH C and the SIA C products. LH was really ok, super friendly and attentive cabin service and ok seats. But the seats are really not as good as BA or SIA and sleeping is difficult because you’re not in a „cubicle“. So stepping aboard the SIN-PER plane the difference was noticeable – much more space, more „cubicleness“, more comfort on SIA. That’s the LH experience for you – make the product as cheap as possibly acceptable … . But again, thanks to the cabin crew, they were top notch. SIN to PER is just a short hop, 4:50h, and we landed 15mins ahead of schedule, through immigration in 2mins, luggage arrived completely and immediately – altogether just 10mins from deplaning to out of the airport. Very nice. 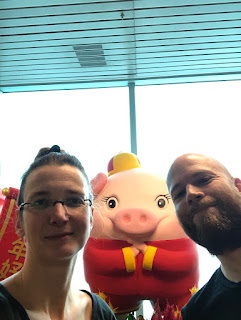 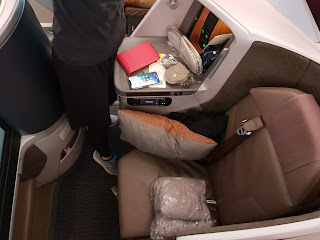 Since we arrived around midnight, we spent the first night at a B&B in Ascot, a few minutes from the airport. Wonderful place, highly recommend Epsom on Swan B&B! And right next to our car rental outlet as well. So after a good night’s sleep, a hot shower, and some breakfast, we were off to pick up the car. Turns out there are two companies called „Ace“, one to the left of the B&B, the other to the right. We went left and found out it was the wrong one. But a friendly bus driver took us to the other one for free. And we got lucky this time, probably the most modern car we’ve ever rented – for very little money. It’s the second time I’ve rented through „rentalcars.com“ now and that’s working like a charm in Oz. I almost feel sorry for the shiny white car for taking it down all the dirt and forest roads. By now, the back half is coloured orange already. 😀

So, off to do some shopping and then South to Balingup, with a yummy lunchstop at Cafe One58 in Mandurah on the way. 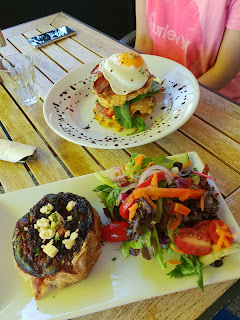 The big difference between driving in NZ/TAS and Oz? Speed limit is 110, roads are straight, set the cruise control to 115 and just go. No attention required whatsoever. Quite relaxing. And very little traffic at this time of the year as well.

Coming up in one of the next posts: The Giant Penis Forest!