Finally got around to finishing this. We drove from Mesa Verde to Monticello, Utah and again, there’s nothing to complain about. This is really hard for us Germans, we are brought up to whinge and complain and moan and when we finally end up having a good time we are fucked because that’s against our nature. So we start a genocide. No, I did not. The people of Monticello are way too nice for that. Very friendly and helpful staff and the info site and at the motel. We managed to get a room at the only non-chain motel in town and it was worth it. Nice pool. Next morning we took off really early because we wanted to hike into Canyonlands NP as early as possible. Half an hour out of town I realized I didn’t have enough cash to pay the entrance fee. So we drove back to Monti, got some cash, and then off to Canyonlands only to find out that we needn’t have bothered. Well, nevermind. What a beautiful, beautiful landscape. A-mazing. And harsh. We got lost in the desert and were rescued by some friendly locals. But hiking in the desert is definitively a different thing than in the mountains. At least we didn’t meet any rattlesnakes – we met an Aussie couple who’d gotten lost as well and could not backtrack because the way was blocked by rattlers. We just heard them and it is a frightening sound. Not that they would have stood a chance, after all I once wrestled a 25m python to the ground in Alice Springs. After the regatta.

So Canyonlands is definitively a great place to visit BEFORE 8am! after 8am, you will a) spend way too much time hiking in the mid-day/afternoon heat and b) there are simply too many people. In the carpark of course. Walk 15 minutes and you barely meet a soul – even if you don’t get lost 😉 – but the drive-in mentality of the Americans is really amazing. 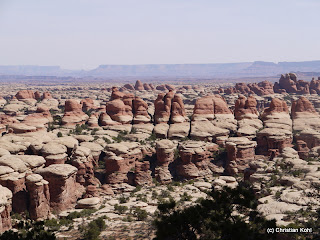 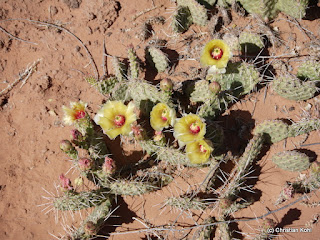 Whatever, after finally getting back to the park entrance we bought some ice-cold water and headed north towards Disneyland, I mean Moab. Moab is probably a lot like Queenstown in New Zealand – excellent location, too much „adventure capital“ bs going on for my taste. Besides that, we found a great cafe (horrible name: Peace Tree Juice Cafe – but great food) were we basically ate ourselves to death. 🙂 Up early next morning to see another highly recommended attraction, Arches NP. Unfortunately, this is nearly 100% drive-through, there are 2-3 areas where you have to walk, but all of the walks are walks, not hikes, and there’s millions of people around. You need to get up real early, otherwise it’s just a traffic jam in a nice setting. The setting is, even after the smashing Canyonlands scenery, still breathtaking at times and I’m glad we went to see it after all. But yeah, very American, what can I say. At least they don’t allow McD or SBucks to set up stores inside the parks – yet.

In the afternoon, we headed back to Colorado, along a really boring piece of Interstate. We spent the night in Montrose (Black Canyon Motel, highly recommendable!), close to the entrance to the Black Canyon of the Gunnison NP and again, took off early in the morning to avoid the crowds. The Black Canyon is impressive, I must say, and it was a nice change of scenery after all the desert, sandstone colored days in Utah to see some green again. Lots of chipmunks and lizards here too.

We had plenty of time left that day and decided to take the longer, but scenic route (135/133) north to Glenwood Springs. Nice! And so uncrowded. Maybe it’s better to spend the time on the road instead of in the parks in the US? We stopped in a tiny town called Paonia at the „Flying Fork Cafe“ at that was maybe the best cafe on the whole trip – I could have bought their whole supply of pastries etc. And kinda half did. Yummy! I LOVE Cin-na-mon! 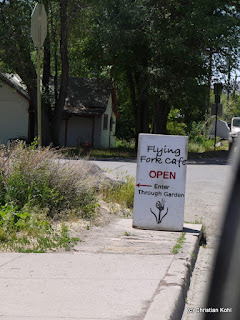 Glenwood Springs then is rather nothing to write home about. So I won’t. The „Springs“ (‚Spa of the Rockies‘) are not really worth their entrance fee – beautifully located right under the highway … . Ok, I mean, we are spoilt after the „The Lost Spring“ in Whitianga but still … . Driving north-east from Glenwood Spring is a very beautiful short and easy hike up Glenwood Canyon to a hanging lake (aptly called „The Hanging Lake Trail“, exit 8 on I70), a small waterfall, lots of birds, and a resident marmot. If the Reisebegleitung was still undecided whether this trip was worth it or not, the matter was crystal clear the moment she saw the marmot … funny how furry little animals appeal to women, wonder whether that’s evolution or socialization or both? The only downside is that you have to drive all the way (ca. 8 miles) back to Glenwood Springs to be able to get to the other side of the highway again. They don’t fucking mention this in the fucking lonely planet of course. I could rant about the poor state of LP these days, but I’ll do that in a separate post, too much negativity! 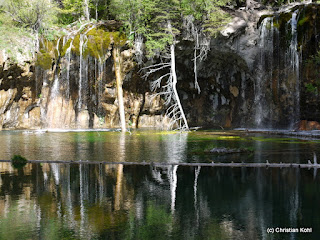 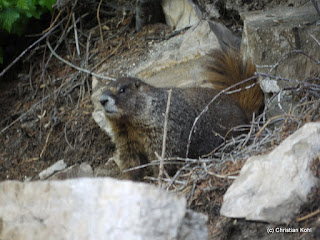 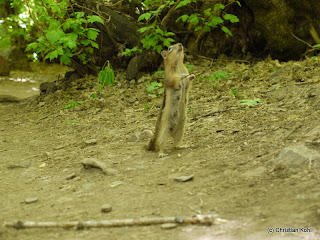 We left the I70 at Silverthorne – the plan was to drive north and then west, via Granby, Grand Lake, take the Trail Ridge Road over to Estes Park. Only problem – when we got to Grand Lake, the pass was closed. 🙁 So we had to take a looong detour, back south, through Granby (one of the most depressing towns I’ve ever seen, even worse than Invercargill), west on the I70, then back up north through Central City (maybe even worse than Granby?), through the Roosevelt Forest to Estes Park.

Estes Park is, well, every bit as touristy as we feared, but for some reason it didn’t bother us. We stayed at „Deer Crest Resort“ which I wholeheartedly recommend! It is well out of the way of all the tacky souvenir bullshit action, quiet, well-kept, very friendly hosts, and marmots on the lawn! 🙂 In Estes Park itself, do spend your money at Kind Coffee, try the Mexican Mocha, and say hi from Captain America from Germany. Your best bet for vegetarian food is Tulum’s. On the other hand, stay away from the Big Horn Restaurant. Piece of Shit! Hitler rating: 0.

Rocky Mountain National Park is beautiful – just remember to get up early! This will a) allow you to avoid the crowds, the traffic etc. but b) also gets you some beautiful views with early sunlight, mountain reflections in calm lakes … you get the picture. Recommended order of activities: get your gear ready before going to bed, get up shortly before 6am, pick up hot drinks and breakfast from Kind Coffee, get on the trail, enjoy. We spent three and a half days in the park altogether, including a drive up Trail Ridge Road – which had been opened only hours after we had to turn back and take the long way round … . We did some hiking in the NP in the Bear Lake area – phantastic views in the early morning sun! Some of the higher regions were still impassable because of too much snow but there were plenty of trails left. On the next day we decided to tackle Twin Sisters Peak because we (I) needed a challenge and all the guidebooks and maps classified this one as „arduous“. Well, it sure is a very nice hike up the mountain with beautiful views and some interesting birds to watch, but it was not arduous, not strenuous, nothing like that. But still worth it! We got back early, I showered and put on my Captain America T-Shirt, because it was Memorial Day after all! My friends at Kind Coffee were enthusiastic and I got coffee for free. Go USA! 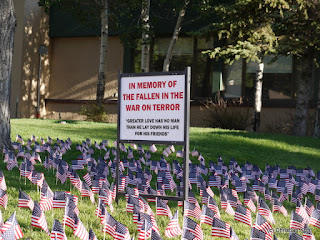 Gotta come back to those trail ratings – I’m used to Oz/NZ ratings and there I’m usually a lot faster than the recommended time even though I take heaps of pictures. But they are usually accurate when they say this is easy/medium/hard … . Not so in the US: easy means that my grandmother can do it walking on her hands, hard means you’re barely sweating … I guess it’s all based on the average overweight American and not on the German fitness master race nazis. I’ve never seen so many fat arses as on the trailhead in RMNP on Saturday. 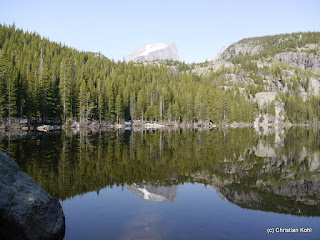 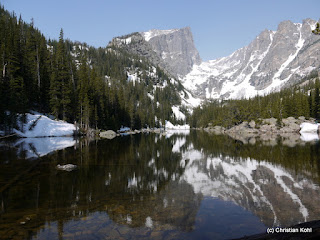 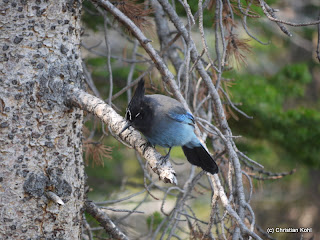 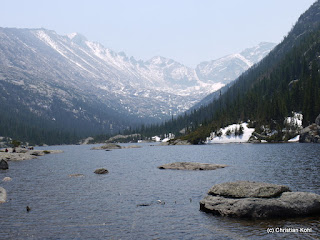 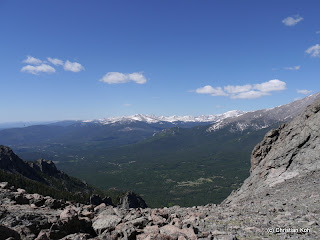 Last stop was Boulder. This is where the Reisebegleitung managed to damage the brandnew car, but apart from that – what a fantastic place! I mean you got all the city mod cons coupled with great outdoors at your doorstep, a public transport system that works, bike lanes all over the place, a mall where chains stores are banned and which is dominated by locally owned businesses, lots and lots of place for great food … . (Try: The Kitchen; Leaf; Boulder Cafe; Two Spoons; I did not like Maiberry too much, despite all the hype.) I could go on, probably not forever, but for a long time. They don’t have a beach though, so not perfect after all – we’ll find out what global warming can do about the (see: Flood by Stephen Baxter).

Two pleasant surprises awaited us at the airport. Avis kinda forgot that I had waived the ldw reduction option, I had explicitly not paid for the Vollkasko. But they didn’t want any money for the damage on their car. Well, so be it. And then British Airways upgraded both of us to business class, which made for a very relaxing flight back and a well-rounded trip. Hooray!