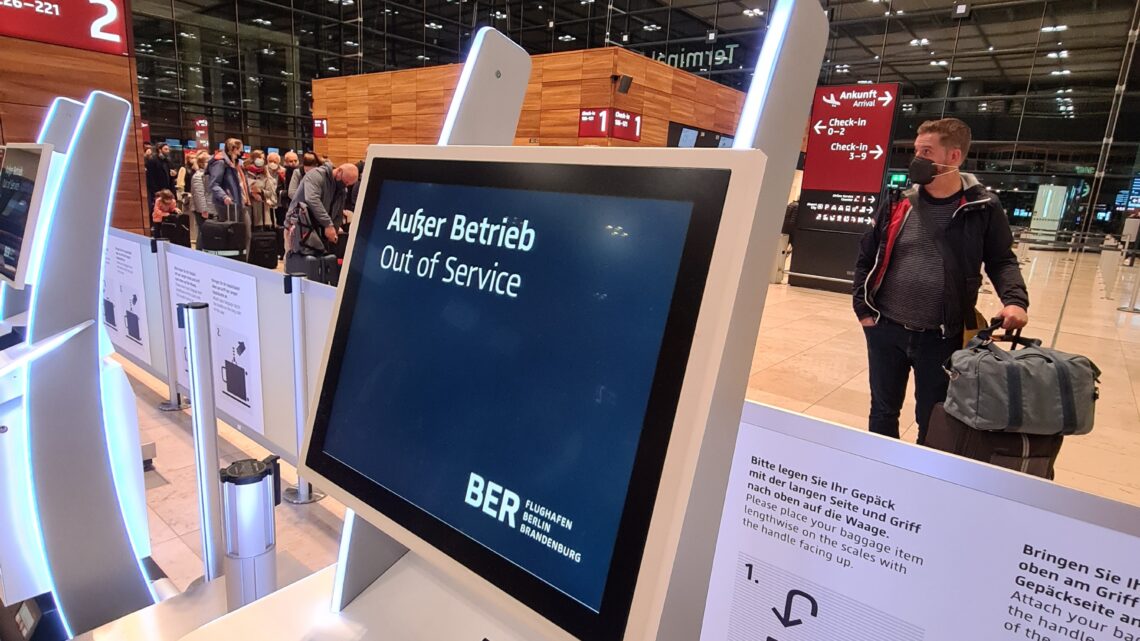 I might have briefly mentioned it. BER sucks. And that’s really putting it mildly. We have both decided that we will not fly from BER anymore in the future unless it is a business class flight with dedicated priority lanes etc. We’d rather travel to Leipzig, Frankfurt, Munich by train and depart from there. The BER airport is a disaster and there is no way it can improve, because a lot of it is due to the bad architecture – there’s simply too little space. Which is logical, since BER is not an airport but a shopping mall with gates attached and what little space there is must be given to duty-free shopping. But besides the architecture, the organisation and the personnel/staff is a complete fuck-up as well.

The pictures in the gallery show BER on the day of our departure, starting at 5am … .Utter madness. It was not a holiday, not a weekend, no school holidays … just a routine day in hell. As you can see, endless queues, both at check-in and security. And no, it is not because of Covid-19! It’s because the architecture, the staff, the organisation, and the management are completely useless and incompetent. Sounds like Berlin? Sure does. :rofl: Of course the self-checkin machines are not working. Of course fucking Eurowings does not staff all their check-in desks. Of course there is no personnel to manage queues and provide directions.

Check-in was still pretty civilized, it was after when it really went downhill. Again, the sad fact – almost all security lanes were opened, so there are no excuses, it will not get better, because it was already at max capacity … . :facepalm: Security lane was a two-part affair – first queue up to the point when you scan your boarding pass, then again snake up to the actual security check. So we queued up for the first part until we reached the boarding pass checkpoint – and were told by a braindead security staff person to move over to „number 5, because it’s empty there“. So we went over to „number 5“ and hell no, it was even fuller over there. So queued again until we finally managed to get through boarding pass control. By this time, people were becoming more and more aggressive, quite understandably. There was no airport personnel to be seen. People did not wear masks (properly) and did not keep distance. I had to use my backpack to enforce a distance from the guy behind me. After I’d „accidentally“ hit him three or four times in the face and reminded him about the mask mandate, he finally got it … . Most people were not so lucky, it was a massive superspreader event. And the „authorities“ did not even try to enforce the rules which are meant to ensure the HEALTH and SAFETY of the passengers. Because they obviously do not care about the wellbeing of their customers, probably because they are nazis themselves. But it got even better – there were at least three fights that broke out in the line (further) behind us … and again, no police, no security, no staff intervened. How crazy is that? This is the capital airport of a G7 country … . But again, very Berlin. I know the grass is always greener on the other side – other airports have queues, too, but they at least manage them. There was nothing of that sort. Sometimes police or staff walked by, they did not say anything to people ignoring mask mandates and violating distance requirements. Which means that the police actively noticed that my (and a lot of other people’s) health was in danger – and decided to ignore it. Which in turn means that they are fucking nazis. All of them.

Last, but not least, boarding. Here, Eurowings had a nice feature – they let you walk across the tarmac in rain and cold (+1 degrees) and stand there for a couple of minutes. This is how much they value their customers. Oh wait, it gets even worse. Turns out they do not enforce the mask mandate on their planes, so again lots of German nazis aiding other German nazis in endangering the health and safety of the few non-nazi people on the plane. Fuck you, Eurowings. I’ll never fly with you again, that’s for sure. Let me write it again, because it feels so good: Fuck you, Lufthansa and Eurowings. I hope you rot in hell.